Teach your Kids the Computer Basics 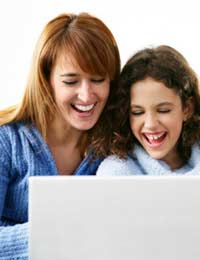 Imagine you’d never seen a computer before. How would you know what to do, how to make it work? Your child will have probably seen a computer every day as a baby but not shown any interest in it.

As a toddler though kids get more curious and from the age of two may start paying attention to the computer – especially if they see you using it. Once they’re interested you can start teaching them the basics, although you should let them dictate the pace of learning.

From about two children start to become aware of cause and effect. Children’s toys are often based giving the child a reward if a specific action is carried out. For example a different noise will sound for each button pressed.

At this age you can introduce them to the idea that when they press a key on the keyboard something will happen on screen. There are specially designed keyboards for children that have fewer keys that are easier to press and colour coded for accessibility. Using pre-school software you can entertain your child while introducing them to the key computer components.

Once your child has grasped pressing keys in order to trigger a specific response (rather than just hitting them for the physical action of pressing something), you can start to teach them the basics of how to use the mouse. To regular computer users the mouse is simple to understand and use, but as a new user it can take a bit of getting used to.

Let your child play around with the mouse just following the cursor around a blank screen (an empty word document is good for this) to get used to how their small hand movements relate to the movement on screen. When they’ve built up some mouse control create some objects on the page and make a game out of finding the blue square, or red triangle and pointing at it with the cursor.

The next stage, when your child can use the mouse to control the cursor, is to teach them how to select and then open a program. At this stage teaching them to left click is probably enough. The options available with right click are more complicated and less interesting to a child.

Important Keys on the Keyboard

Now your child understands that the keys dictate what happens on screen and the cursor selects objects and helps to move around the computer you can start to show them how to find their way around the keyboard.

It’s likely, if you’ve started playing with the computer when your child is two or three, that they can’t read, or not very well but they will probably recognise letters. Don’t get too caught up in teaching them where the letter keys are on the keyboard. If you succeed in teaching them the qwerty layout before they properly learn their alphabet they’ll get terribly confused when they start school.

The most import keys to understand are the space bar, the return key, the cursor keys and the numbers. Most kids’ software uses these keys to work through games and exercises. Keep their functions fairly loose at the moment as the space bar is used for many different functions other than creating a space.

How to turn the computer on and off might seem a very basic thing to teach but decide when you want your child to know this. There’s always a risk that they might turn the computer off while you’re using it, or on when you aren’t around to supervise.

Make sure you child understands that the computer can only be turned on when you are there and that they are never to touch the on/off switch without asking you first.

Learn Computer Skills from Your Child

Computer Games That Are Good for Your Child

Could Your Child be the Next Bill Gates?