Will Using a Computer Damage my Child's Eyesight 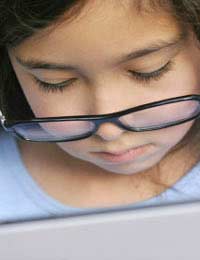 There is some evidence linking computer use with eye strain, but can this lead to long term damage in children? And is there anything we can do to protect them?

What Is Eye Strain?

Due to the way computer screens work, prolonged use causes eye strain, in adults and children, which can result in head aches, blurred vision and dry eyes. For years we’ve been told to take regular ‘eye breaks’ at the computer to let our eyes relax and refocus on something in the middle distance.

Some studies suggest that the problem is not actually the computer screen but a combination of poor lighting and using the computer at the wrong angle. Our eyes are also not designed to focus on a fixed point for long periods of time and computer use rarely gives our eyes the chance to relax, especially computer games.

Adults and children with existing eye problems will suffer more from Eye Strain as their eyes have to work harder to focus.

Usually the symptoms associated with Eye Strain go away as soon as the eyes get a rest, but there is some evidence to suggest that children who regularly spend a long time in front of a computer are more likely to suffer from myopia (short sightedness) than other children.

In the last ten years the numbers of children prescribed with corrective glasses has seen a dramatic rise, with many children reporting problems focusing. There are circumstantial links to the increased time children spent in front of a TV, Computer or Games Console, but it is possible that more children who would previously have gone untreated are being seen because of the more visible symptoms of eyestrain.

Regardless of whether eye strain does lead to long term damage or not taking an eye break is a good habit to get your children into early. Remind them to look away from the screen around every ten minutes – and ideally get away from the computer for a full body stretch while they’re at it.

To minimise the impact of computer use make sure your child’s computer screen is tilted down at about a 15 degree angle, and that they’re about two feet from the screen.

Many people will be surprised to hear that bright lights are not the best solution for computer use. A less bright broad light will make reading the screen less of a struggle for your child’s eyes, and an anti glare screen can also help.

Sunlight Is Good For You

Initially it was assumed this was because ‘indoor activities’ such as reading, computer use, watching TV and playing computer games all contribute to eye strain and this was leading to myopia.